We are an organization that encourages the research, education, cultivation, hunting, identification and the cooking of mushrooms. With over 1,200 members, PSMS
is one of the largest mycological societies in the country.

We share our knowledge about mushrooms through meetings, classes, workshops and field trips.

Please join us at a meeting or become a member today!

Fall 2022 "Hildegard Hendrickson ID Clinics" at CUH are done for the season!

Thank you to everyone who participated and helped out. See you in the spring!

For over fifty years, the Puget Sound Mycological Society (PSMS) has nurtured collaboration amongst its members for an understanding and appreciation of the wide diversity of mushroom species in the Pacific Northwest. We also depend on a diverse membership to support our mission to foster the understanding and appreciation of mycology as a hobby and a science. In recent months, as systematic inequality in U.S. society is revealed to a broader audience, it becomes clearer that inequality imposes barriers on marginalized groups to participation in a wide variety of activities. PSMS opposes all barriers that limit participation in mycology. PSMS and its board members support a more diverse, inclusive, and welcoming organization where all people, especially those who are underrepresented in our organization and society at large, can enjoy mushrooms and all of the activities associated with them. We realize this will be an on-going conversation and are looking to our members for suggestions on ways to increase diversity, inclusivity, and welcoming. Thank you as we join together to make this long-overdue journey toward systemic equality!

If You Suspect
a Poisoning

Spore Prints is the monthly newsletter of PSMS containing announcements of coming events and speakers, plus a variety of tidbits, trivia, recipes, and research developments.

Washington state is divided into numerous federal, state, local and Native American jurisdictions. Learn the proper rules for each jurisdiction. 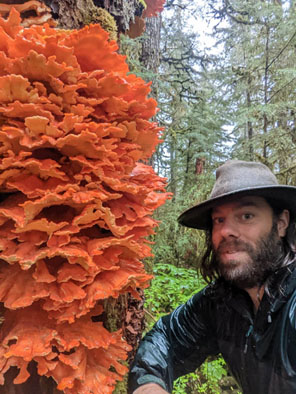 February's General Meeting will once again be a hybrid meeting including both in-person and ZOOM at the Center for Urban Horticulture on February 14th. We will start letting members in at about 7:00 pm. Please come share Valentine's Day with us learning about fungi.

During February in Washington State, one might think that macro-fungi are largely done fruiting from Fall and waiting for Spring. However, our Speaker this month, Noah Siegel, will enlighten us with his presentation "Stop Walking on Truffles: The Cryptic Life Underground". Per Noah, The Pacific Northwest has an amazing diversity of hypogeous fungi (truffles and false truffles). Although truffles are renowned for their culinary properties, very few species are highly prized edibles. This talk will highlight the diversity and beauty of our underground fungi, and how to find and identify them.

Noah's field mycology skills are extensive - he has spent over three decades seeking, photographing, identifying, and furthering his knowledge about all aspects of macrofungi. He has hunted for mushrooms throughout the United States and Canada, as well as on multiple expeditions to New Zealand, Australia and Cameroon. He is one of the premier mushroom photographers in the nation, having won numerous awards from the North American Mycological Association (NAMA) photography contest. His technique and attention to detail are unrivaled, arising from a philosophy of maximizing utility for identification purposes while maintaining a high degree of aesthetic appeal. His photographs have appeared on the covers and have been featured in articles of multiple issues of FUNGI Magazine (the primary mushroom enthusiast magazine in the United States), numerous mushroom books, as well as many club publications. He authored, along with Christian Schwarz, Mushrooms of the Redwood Coast, a comprehensive guide for the northern California coast, and A field Guide to the Rare Fungi of California's National Forests. He is currently working on Mushrooms of Cascadia, a reference guide for Pacific Northwest fungi. Noah travels and lectures extensively across America, following the mushrooms from coast to coast, and everywhere in between.